10/17/22
Developers trying to ignore our zoning: Will the City rollover? read

5/17/22
Video circulating is NOT from SMCLC read

7/31/20
Irresponsible and Illegal: Our Council in Action read

5/12/20
Letter to Planning Commission: An Ill-Conceived and Misguided Proposal read

5/5/20
Letter to CC: Include Longstanding Community Groups on Economic Recovery Task Force and Limit its Role to Recovery Efforts read

11/2/19
Come hear SMCLC and SMa.r.t. go head to head with the developer of the 4th and Arizona project at NOMA this Thursday November 7th from 7-9 p.m. at Montana Library

Do you want a huge, privately owned LUXURY HOTEL built at 4th and Arizona on PUBLICLY OWNED LAND in one of the most congested areas in the heart of Downtown Santa Monica? Come hear Diana Gordon of Santa Monica Coalition for a Livable City (SMCLC) and Ron Goldman of Santa Monica Architects for a Responsible Future (SMa.r.t.)

Diana and Ron will be responding to a developers presentation to NOMA at its next meeting Thursday, November 7th from 7 - 9 p.m. at the Montana branch library (17th and Montana Ave). The entire program will be devoted to discussion, questions and public comment concerning this project.

The SMCLC quesstions to be asked at the forum: read
2/4/19
City Ignores Resident Input on Massive Project at 4th and Arizona. read

3/1/16
SMCLC Says Downtown Community Plan is Fatally Flawed and the City Needs to Start Over! read

1/26/16
City: Parking for employees, not for residents read

6/17/15
SMCLC Urges the City Council to appoint M.Fonda-Bonardi and N.Fresco to the Planning Commission read

read press release
read lawsuit
3/5/14
City's poll confirms that residents reject greater heights and densities for downtown. Read SMCLC's detailed letter to the City Council discussing the poll.
2/10/14 RALLY!!   WED 2-12-14 7PM  606 Wilshire
A local group called "Residocracy" is seeking to place a referendum on the ballot, so Santa Monicans can vote on whether the massive Hines project should proceed. The Santa Monica Coalition for a Livable City supports this referendum and will be helping with the campaign....read
2/3/14
Rally at Santa Monica City Hall to Oppose Massive Hines Project ... read

This Tuesday, February 4, our City Council will be voting on whether to allow a powerful, politically connected, Texas developer to build its massive, unpopular project in the most congested part of our city. ... read

As a precursor to a lawsuit, SMCLC has served its legal objections on the City to the current Hines project. The grounds include the failure to evaluate reasonable alternatives to the massive project under the California Environmental Quality Act known as ("CEQA"), circumvention of maximum building heights, mass, and modulation standards mandated by the Bergamot Area Plan, and failure to meet affordable housing mandates. ... read
1/27/14
SMCLC Objects to Hines project and city consultant's report that the project somehow doesn't pencil out for Hines ... read
1/23/14
SMCLC tells City Council that Development Agreement on Hines is flawed. ...read

If you attend no other Council meeting this year, this is the one you should come to.

... read
12/31/13
Forbes article makes compelling case for why Santa Monica should just say NO to tower architecture and famous architects to remain beloved and unique ... read
9/10/13
SMCLC Asks Planning Commission to Send Hines Back to the Drawing Board for its Persistent Refusal to Negotiate a Reasonable Project or Meet with the Community ... read
8/15/13
Huge Win for Santa Monica Residents – A Downtown Plan Limited to 84 Feet! ... read
7/16/13
SMCLC Urges the Planning Commission to recommend that a draft Downtown Specific Plan be completed, circulated and reviewed before the City commences environmental review of the Downtown ... read
7/7/13
SMCLC Objects to the Proposal to Start a Program EIR for the Downtown BEFORE there is Even a Draft Plan for the Downtown as a Broken Promise to Residents and Poor Planning ... read

Lookout News on firing in response to residents ... read

2/25/13
SMCLC Urges Council to Finally Pass Transportation Impact Fees that City Should Have Collected from Developers Over the Past 20 Years! ... read

Miramar Open House UPDATE: 2/20/13
Turns out we are not welcome at the Miramar Hotel's "open house," "where our neighbors will have the opportunity to learn more" about the Miramar project. We just received an email from the "Miramar Team" that space concerns prohibit including those who did not receive an "initial invitation." Evidently, business is good; the Hotel is short of space. Stay tuned.
2/18/13
SMCLC Urges Residents to Attend 2/21 Miramar Hotel Open House to View Latest Development Plan and Ask Questions ... read

10/27/12
See the projects Council has approved that are larger than our city zoning allows ... read

Read and see our downloadable flyer


SEE WHAT DEVELOPERS HAVE PLANNED:

SMCLC details the Tsunami of Development Coming to Santa Monica

In a recent presentation, Co-Chair Diana Gordon showed millions of square feet of developments planned or approved for Santa Monica. Part 1 (pdf) uses material from the city itself. In Part 2 (pdf), she talks about resident action to change the outcome of these projects.

View videos of that talk. 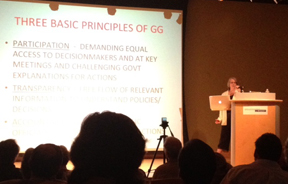 City Memo tells Plan Com: "planning guides the review of the DAs rather than the DAs directing the Area Plan"  -  REALLY!? ... read


2/24/12
SMCLC Forming a Broad Coalition to Force Hines to Redesign its Project to Reduce its Traffic Impacts ... read